Imagine having a broken, leaking, blocked sewer or stormwater drainage pipe to your premises or business that’s buried under gardens or concrete. Getting to this pipe is difficult enough, but now you have to replace it? That’s going to be disruptive.

But, what if you could simply repair this underground damage, without having to dig up and then reinstate everything? It would save so much time and hassle!

Traditionally, fixing drains that are broken in an obstructed areas require a team to dig up the area, remove the pipes and replace them with new sections. As you can imagine, this is not only costly, but also very time consuming and disruptive. A business that needs to replace a buried pipe may need to close their doors for days or even weeks! That’s a lot of lost revenue that you don’t need.

But there is a fast, reliable and cost effective solution.

Pipe relining can repair damaged pipes without the need to excavate trenching the surrounding areas. Using this new technology, broken, cracked and root infected drain pipes can be repaired without the need for invasive digging and replacement.

How Does Pipe Relining Work?

Sounds too good to be true, doesn’t it? But it’s not!

If you or your plumber find a broken pipe in your buried, underground or hard-to-reach pipes and determine that it needs to be repaired to prevent further structural and plumbing damage, pipe relining can be your knight in shining armour.

Where do we start?

First comes to inspecting your pipes with CCTV and using a water jetter to clean your pipes. It’s important to have completely grime and dirt free pipes, as well as removing any large obstructions for when the lining is inserted. Using the latest technology in water jetting, these tools are powerful enough to cut through tree roots that could be growing inside your pipes. Then if the pipes are PVC, a Picote drain machine is used to scour the pipe and prepare the surface ready for lining. 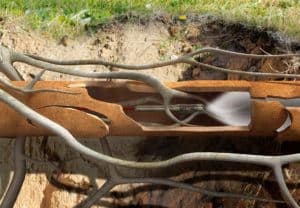 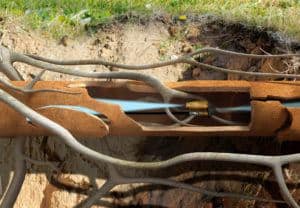 Now that you’ve got your super-clean pipes, you’re ready for relining.

Basically, pipe relining inserts a flexible epoxy resin infused liner into your pipes using air and then set using water temperature and flow. This lines the pipe creating a completely new and watertight pipe within the old one.

Because of its flexibility, the product will seamlessly merge with the existing pipes to create a new and incredibly strong inner pipe. 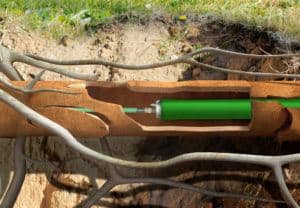 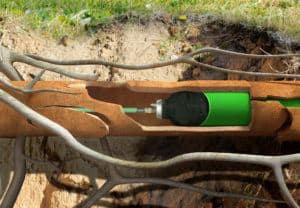 Set the liner using air and then water temperature & flow 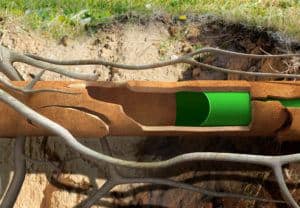 This lines the pipe creating a completely new, watertight pipe within the old one

How Do You Know if You Need Pipe Relining?

To identify a leak or break in your underground pipes, there are a few things that you need to be on the lookout for…

Not only can a hidden broken pipe be smelly and noisy, it can be a very costly venture for your business in other areas if not taken care of ASAP.

Escaping water can mean structural damage to the foundations of your establishment. With excess water, even a slow leak that’s not causing flooding, can cause major damage that will cause a lot of stress.

Additionally, health issues can be caused by leaking pipes. Damage to certain pipes can even mean contamination to your clean drinking water that you serve your customers – which you know will really cost you.

If you’re facing damaged plumbing, we won’t jump straight into pipe relining, but we’ll investigate whether it’s a job for pipe replacement or pipe relining. There are varying costs and benefits for which option we recommend, so we’ll always give you a detailed reason for our recommendations.

How Emu Plumbing do Pipe Relining

Emu Plumbing are proud to use BRAWOLINER technology for all our relining both inversion and patching. We choose to work with BRAWOLINER because their no-dig rehabilitation was designed for a wide range of diameters and materials. So we can reline almost any type of pipe! BRAWOLINER offers many advantages, one of which is the way the resin is utilised and applied, we find to be far superior to other methods employed by other relining brands.

Pipe relining can save enormous amounts of money compared to what a full pipe excavation and replacement would. Brawoliner’s durability guarantee of 50 years, you can be sure you’re getting the best possible relining solution to serve you well into the future.

At Emu Plumbing, we use two methods of pipe relining; inversion and patch. Based on an assessment of your situation, we’ll determine the most appropriate method to get you the best results (this could also mean a combination of dig-up repairs for those easier-to-access problems).

If your plumbing has a junction that needs repair in a hard to access spot, we’ll use our junction relining technology to repair the entire fitting with a one-piece liner. Understandably – this makes it harder to quote ‘per meter’ as it’s a custom fitting.

If your junction needs to be relined due to tree roots, then by Australian standards, you’ll need a junction patch installed that covers 300mm past the break, to prevent tree roots regaining access.

How Much Does Pipe Relining Cost?

There are a lot of factors that affect the cost of pipe relining, such as access to the pipe, the material it’s made from, the amount of damage and size of the pipe. There are also different pipe relining methods we offer including inversion pipe relining and patch pipe relining.

All these things will factor into the cost of your pipe relining. Find out more about How Much Pipe Relining Costs.

Do you think you may have a broken sewer or
stormwater pipe?

Give us a call on 07 3358 3201 or get in touch online and we can help you determine where they are, then provide a quote to reline if necessary.